The staff of the e-Monitor are still on the road making great photography! Look for the next edition in your inbox on May 10. Meantime, watch the posts on the FaceBook page and work on your next article submission. Deadline: May 15.

There are less than two days left to take advantage of drastically reduced conference rates.. you snooze, you lose!

Burgundy is one of 27 regions of France. Chalon-sur-Saone, the city of the IAPP June meeting and exhibit, lies in the southern part of the region. Besides being the center of a large wine-growing area, it is birthplace of Joseph Nicephore Niepce, considered by many to be the father of photography. In Chalon, the museum, Hotel des Messageries, houses old and modern artifacts of photography, along with 2 million photographs…

If you cannot log on, this is a member perk! Consider joining!

As many of you realize, August 10 was the deadline to receive votes against the volunteers.

Questions were raised as to the “legality” of this voting system, whether or not we could count votes against, instead of for. This was researched in the Policy Manual by the previous secretary and he found there was no statement that claimed we could not run the vote this way.

We received no votes against. So, the slate of new officers is as follows:

As you can see, we need a few more members to step up.

Many things are being planned: two of which are the upcoming semi-annual Conference and the future of the Panoramic Association’s own photo contest.

If you have opinions and a little time to donate, your organization needs you. Contact your president: Glenn Cope! 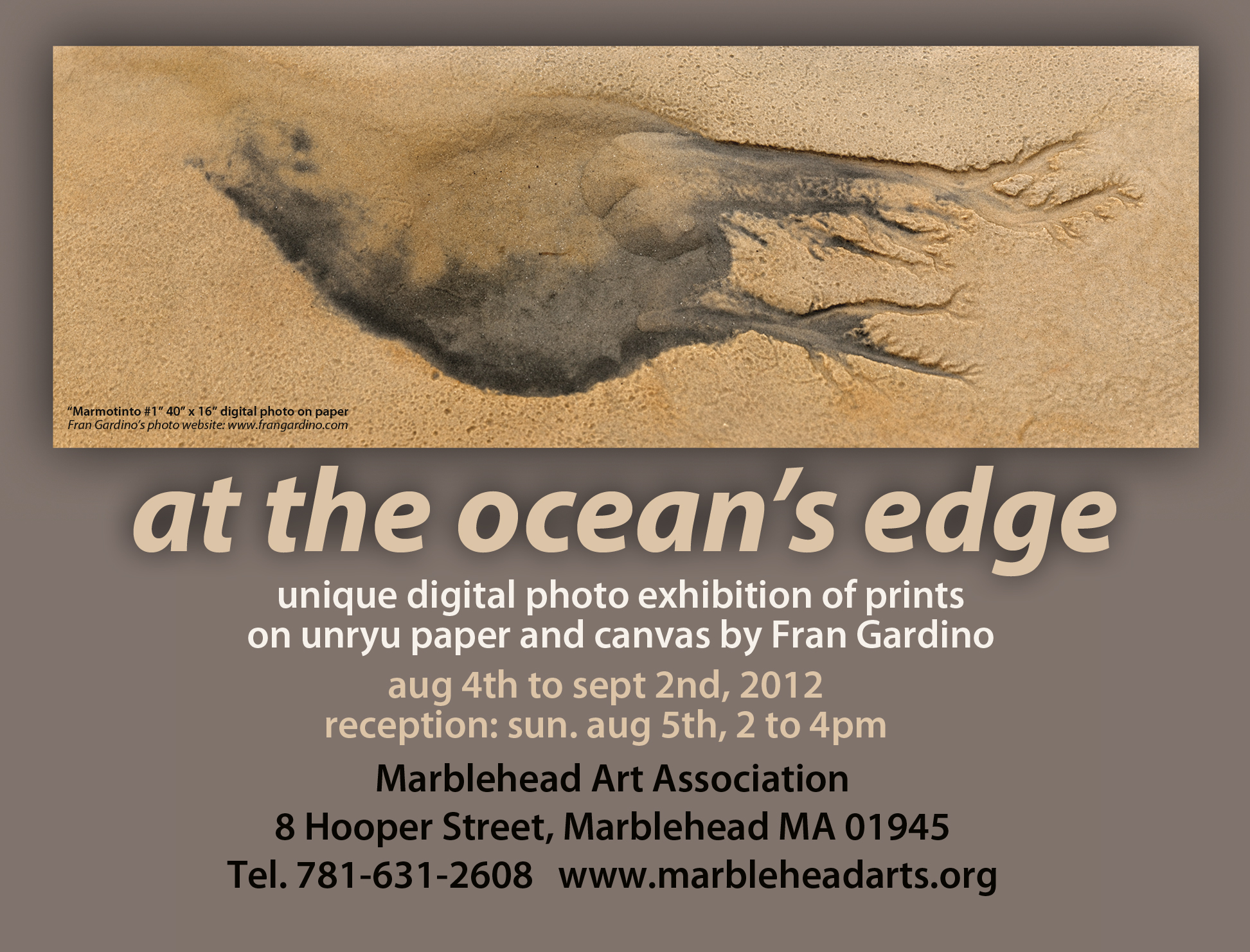 “At the Ocean’s Edge” Digital Photo Exhibit by Fran Gardino

Marblehead, MA – Fran Gardino will be exhibiting his large format photography at the Marblehead Arts Association, 8 Hooper Street, Marblehead from August 4- Sept
2 in the Ballroom Gallery.

The exhibit “At the Ocean’s Edge” includes seaside photos from his recent visit to Sicily, honoring the year 2012, 100th anniversary of his grandfather’s emigration to Boston. All of Fran’s grandparents were born in Sicily, and those on his father’s side were fisherman. His ancestors were told that the ocean was “full of gold”, cod that is. The Old Italian expression “America was made for me” indicated the abundance of “new world” resources available to the arriving masses of immigrants. Fran’s new Italian American expression “Sicily was made for me” refers to the abundance of photographic subjects that he has recently discovered in Sicily, some of which will be shown in this show including a 10 foot long panorama photo on canvas of the yellow rock laden Sciacca Italy coast, and a 7 foot long print of the Capri Harbor sunset.

Following Fran’s 2010 MAA photo show “Down by the Riverside” in the ballroom of the Hooper mansion, this show represents an expansion of his horizon in several ways. First, there are coastal images from many locations including Boston’s north and south shore, Canadian Maritimes, Martha’s Vineyard and Cape Cod, Grand Isle Louisiana, Malibu California, as well as the Sicilian cities of Sciacca, Taormina and Siracusa. Secondly, the prints on Moab Unryu rice paper of naturally formed calligraphic markings found on the beach in Brewster MA. Quoting his friend and calligraphy artist Michiko Imai, “These photos are beautiful and new, unlike any other”.

Finally, there are several large and small photos printed on Hahnemuhle Bamboo paper. This paper was specially chosen to present the striking tone and detail of his “Cactus Plant over Taormina Bay”.

The exhibit runs from August 4 through September 2, 2012 with an opening reception on Sunday, August 5, 2-4pm.

On August 31 Fran invites all to visit the southern end of Revere Beach at sunset for the “Low Sun Moon Celebration” on the occurrence of a simultaneous Low Tide, Sunset and Moonrise, which was inspired by, and the location of Fran’s 10 foot photo image “Revere Beach Sunset” that happens to be currently showing until August 5th in the Off the Wall” exhibit juried by MFA’s Cody Hartley at the Danforth Museum of Art in Framingham MA.

In addition to having 2 large-scale photo installations at Logan airport, several long panorama photos in the offices of the Charles River Conservancy in Harvard Square, the Mystic River Watershed in Arlington MA and 12 photos in the Wellness Center in Dedham MA, Fran has participated in local solo and group shows with a constantly evolving series of photographic work. His landscape photos reflect the combination of photographic and painterly influences accumulated while earning a BFA in Painting from Mass College of Art.

All of his panorama photos are shot in multiple shot sequences and stitched together using Photoshop Merge. The images reflect the process of him panning and tilting his camera to capture the scene, much like a cinematographer would capture a movie scene. Like watching a wide screen movie or TV, his panorama photos are a series of curiosities assembled into one image.

He has managed to generate an appeal to a variety of age groups, tree huggers and ocean and river lovers and city dwellers alike, through his careful photographic observations, sense of humor, high-octane artistic energy and total devotion to art. He has shown his work in numerous shows including the Danforth Museum in Framingham, the Print Triennial in Krakow Poland, the Brighton/Allston Historical Museum, Allston/Brighton Open Studios, NewTV and the Vermont Artisans and Gallery 2 in Brattleboro VT. Jurors from the Boston MFA and DeCordova Museums have accepted his work.

Fran has self-published two blurb.com photo books named “Paint the Sky Fiery” of the Boston Pops fireworks and “Touch the Sky” of cloud photos taken from the cabin of commercial flights. In the spring of 2012 twenty of Fran’s “Touch the Sky” photos on canvas were exhibited in the Alden B. Dow Museum of Science and Art of the Midland Center for the Arts in Midland MI. He has hundreds of photos posted on “Google Maps” and “Sewers of the World Unite” websites.

From the desk of Benjamin Porter:

Dear Friends,
I just returned from my second trip to Myanmar, and it was wonderful to be there!!! It is a very interesting time of change for country, if you have been following the recent news.
Here is the link to some of the photos I made in Myanmar on this trip:
http://fotobenjamin.smugmug.com/gallery/22150715_cj9Sk6/1776421413_hBkkt73

***See details below about how to access the photos and view them as a full screen slide show.

I firmed up my plans to lead a tour(s) to Myanmar in the Fall. My new company for these excursions is Small Footprint Travels. We will be small, honor the local culture,  and leave few footprints, if any at all!
The first tour to Myanmar is scheduled for October 18-31, 2012. It is timed for us to be at the Phaung Daw U festival on Inle Lake. Four Buddha images are rowed around the lake on a tour of other pagodas in the various villages.  It is a beautiful and magical time to be there.
We will visit other amazing places in Myanmar such as Mandalay, Bagan, Yangon, and have the option of  a hike and home stay in a tribal village.
I am awaiting the final prices for the tour, but I want you to have the dates so that you can mark your calendar.
If the October dates are not convenient for you, I will consider offering a second tour in mid-November (yes, we would spend Thanksgiving in Myanmar!) to coordinate with the Taunggyi Balloon Festival. Let me know if November is your preference.
I will limit the tour to a small group of 6-10 people plus myself and a guide/driver. We will photograph, enjoy the  food (cooking class offered), and the local culture. You do not have to be a photographer to join us, or perhaps you would like to improve your camera skills. I will be available to help you with your photography.
Each day will be structured to also allow free time within stimulating and beautiful environments.
As soon as I have the final prices, I will send you them to you ASAP, as well as how to register for the tour.

***To see the slide show, I encourage you to double click “Fullscreen” on top right hand side of the photo page. If you want a quicker viewing without reading captions, it will take you about 7 minutes on the “Fast” mode. Scroll your cursor over the image and the thumbnails of the images will appear. Above the row of thumbnails on the lefthand side is the speed setting for you to choose. If you want to read the captions, select “Medium” and the slide show will take about 15 minutes to view. I hope you enjoy them!

At this time contact Ben Porter directly for any questions or to receive more up to the minute updates about this planned trip. If you try to reach him via the IAPP’s contact us page I will try to forward those messages in a timely fashion. But you can click him name to create an email to him: Ben Porter

The pdf of the latest PANORAMA has been posted and is available to members via the Member’s only section. We have pdfs of PANORAMA’s dating back to 1997!

If you haven’t received your PANORAMA, and you ARE a member please drop me a line (webmaster). We have had a few “not at this address – return to sender”. A good reason to keep your contact information updated… please go into your member profile and UPDATE your addresses.

I will be trying to “remail” those PANORAMA’s next month, but I need corrected addresses!

PANORAMA, The Journal of the IAPP – Volume 28

Just off the presses and into our member mailboxes… If you haven’t received yours: contact the web mistress with a PANORAMA in the subject line.

FYI: You may notice a difference in the content. With the addition to the monthly online newsletter, the PANORAMA will no longer concentrate on technological or hardware based informational articles. That content is better served up to you on a monthly basis in the e-Monitor for inspiration and freshness. Nobody likes old news! The PANORAMA will only contain information of the most recent conference, photos, ads from our loyal sponsors, and Winning images from the two contests that we sponsor.

Want to have a fantastic working vacation in Burgundy, France? Join Denis Tremblay today. Registration open to the first 60 people.